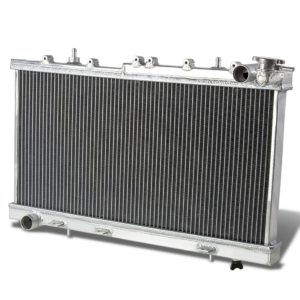 Radiator removal and replacement on a 1992 Nissan Sentra SE-R

I wanted to remove the AC condenser on our Sentra SE-R race car. This step involved removing the radiator first.

When the top radiator hose was removed, I noticed the inlet tube from the radiator was broken. I ordered a radiator and kept working.

Then I found that I could not get either fan out. I had to remove the tubes and a black box that is part of the EGR system to make room to pull the driver side fan. The passenger side fan can be left on the radiator and pulled as a unit.

The AC condenser was then held in by two more clips that bolts to the support.

When the new radiator arrived, I found that the inlet and outlet pipes were too small. The new hoses did not fit. I took it back to the store and ran all the options and all listed the same 1 1/8 inch fittings not the 1 3/8 fitting that the SE-R radiator has.

All the parts stores I tried listed the same smaller fitting. Eventually, I found that Advance Auto listed both sizes. When the radiator arrived, I found their solution was to use a rubber sleeve to make up the difference in diameters.  Now that I have the sleeves, I can use a radiator from any of the major suppliers.

I then removed the vent screw above the thermostat and filled the system with coolant. Once it was filled, I replaced the screw and the radiator cap.