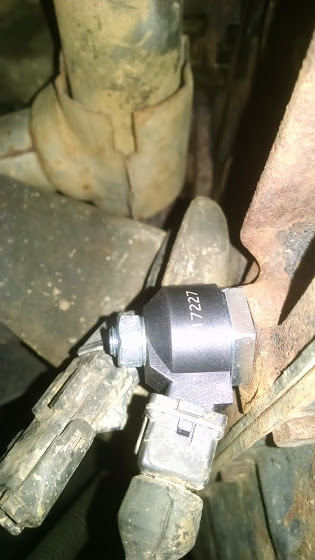 How to replace the knock sensor on the Jeep Renix engine.

The knock sensor is used by the Renix engine control system to fine tune the ignition timing.  If it hears knock it will back off on the timing a bit. It will run the ignition timing as far advanced as it can to get the most power and fuel economy.

If the sensor fails or is damaged, it will read zero knock and the engine will run the default ignition curve.  This may allow too much advance and cause the engine to knock.

My dad’s Wagoneer has a 4.7 stroker motor had has developed a taste for high octane fuel to limit knock. He thought it was because of his stroker motor.

However testing with Nick in Time’s REM module showed no reading from the knock sensor. I decide to replace it.  In the past I had not been able to find these replacements but I was able to find the newer GM style available on Amazon. Part number: KS99

The knock sensor is located on the driver side of the block near the oil pan.  It is best accessed from below.  The connector looks like a fuel injection connector and is held by a clip in the same way. I used a pick to remove the clip.

I then unscrewed the old sensor from the block and saw that it was obviously broken.  24MM wrench.

II then threaded in the mounting stud for the new sensor. 24 M again.

With the stub in place I clipped the new sensor to the connector. Then I slipped it in place on the connector and tightened the retaining nut. Loctite is recommended. 13MM wrench.

I then started the engine and as soon as I revved it up, I saw a knock reading on the REM.  I took it for a short test drive while monitoring both knock and ignition timing.  Both looked int he proper range.  I will give it a try on lower octane fuel soon to see how the knock readings look. If I can use 89 instead of 93 that will be a big savings in fuel costs.

Post Views: 4,336
If you find the information on this website helpful, please consider making a donation of any amount. Thank you for your support.